The Result of University Cost-Cutting Measures . . .

the Plausible Deniability Blog takes up where the PostModernVillage blog left off. While you'll see many of the same names here, PDB allows its writers and editors a space away from financial strum und drang that torpedoed the PMV blog.

Contemporary Conservatism and the Locus of Control


I can't help but think that the real problem with contemporary conservatism is that it traps people between external motivation and the expectation of an internal locus of control.

This produces the ultimate mindfuck, a powerful manipulative tool that projects tyranny far beyond the actual abilities of the oppressor to harm the oppressed.

It operates on the assumption that the reason for doing something (work, kindness, being “accountable”) is outside the person (the expectations of a vengeful God/country/king/marketplace/CEO), but the responsibility for doing something is entirely inside the person. This would explain why conservatives can believe both in authoritarian hierarchies and also believe in personal responsibility. Consider that conservatives support command and control structures that rely on punishment rather than reward, deterrent rather than cooperation, submission rather than empowerment. But they also support “self-starters,” entrepreneurship, and “freedom” broadly speaking. These things would seem to be incompatible unless the external motivation/internal locus of control theory is applied.

In the conservative paradigm (which governs almost all of our corporate, educational, and executive political systems), people are trapped into believing that if they did not achieve the proper outcome it is always their fault for not being responsible enough, even though they were “just following orders,” “just doing their jobs,” or, in the case of the latest economic downturn, “doing everything right” by investing in the market. The fact that their failure was highly likely, if not inevitable, given their circumstances and resources, is exactly why those in power tend to be conservative and operate by this set of assumptions, regardless of what they officially say. This is why Barack Obama can run as a liberal but, when he gets into office, “punish” his foreign enemies with drone strikes when they get out of line; this is how he can espouse a drill-and-test educational system and a regime of massive internal surveillance. All of these are based on the premise that motivations are external while all responsibility is internal. Consider the arguments: the Syrian government must be motivated to do what we want by the threat of force. Children and teachers alike must be motivated by the threat of the exam, upon which rides both their academic and their professional futures. At the same time, we say things like “Assad brought this on himself,” and “children must live up to standards of excellence.”

Thus trapped in untenable positions, people have little choice but to internalize the master narrative and feel that they can and should act only in ways prescribed by whatever authority they see as most operative in their lives. These authorities become the external arbiters of their behavior and help define their orientations to authority until something else has sufficient force to supplant it. Thus a “wild” teenager finds what he believes is “discipline” in the army. What he finds, of course, is fear, and he does not know what to do with himself without its threat. This is at least partially why so many returning vets have no idea how to re-integrate into civilian life: they have not identified with the new externalities, and there are no real means in our culture to nurture (much less make a living from) what motivates us internally.

This form of social control is subtle, brilliant, and ultimately disabling, leading us to seek control in other, usually self-destructive, ways, such as self-medication, controlling relationships, cutting, mind-numbing entertainments. If we engage in these too much, we find ourselves enmeshed in the officially and formally authoritarian systems of control: prisons, coercive “welfare” schemes, psychiatric “care.”

Despite the rhetoric, then, or perhaps as an indicator of its true intent, people acting out of intrinsic motivations are an existential threat to conservatives and to the systems of control and command that they embody, maintain, and seek to perpetuate, This is why the “geek” must be ridiculed or, when useful, corporatized and monetized, indentured into his “proper place as an engineer or an apparatchik. This is why the artist must be marginalized, the humanities department defunded, and “blue sky” research turned vassal to technological R&D. This is why mere refinement is redefined as innovation and innovation is relegated to the garage, the coffeehouse, the alternative communities of open-source software and “maker” spaces.

This is what Kafka got right: the motivations of the artists, the innovators, those who will help our civilization survive when our climate changes or the meteor falls, are internal, as basic as hunger, as clear as sweat.
Posted by EW Wilder at 1:36 PM No comments:


We call one person mad who attacks a public gathering for political purposes, but we call heroes those who “engage the enemy” knowing full well that innocent civilians will die in the process. Indeed, the war that we now look back on as “the good war” also brought us the concept of “total war” and involved both sides in the wholesale targeting of civilian populations in order the wear the enemy down and force a surrender.

Granted, some of our disconnect here involves how our media cover such events: the details of an “act of terrorism” are repeated endlessly and dissected microscopically; the families of those who died are interviewed, the life stories of the dead recounted. If any information at all is reported about the effects of war on “the enemy,” it's extremely vague, of the “we've got them on the run” variety, often reduced to number of missiles fired, sorties run, troops deployed, bodies recovered. In other words, “terrorism” has human effects and war has statistical effects.

But underlying the impulse to report this way we find, I believe, the heart of the matter: we judge the mass slaughter of innocent people not by its effects or by its real horror or even by its relative justice (or lack thereof) but by the perceived intentions of its perpetrators.

Killing a bunch of Afghans who had nothing to do with attacking us is acceptable because we believe that our intentions are pure, even if part of our strategy is to so terrify the population that it will no longer “harbor terrorists.” We judge the terrorists' intentions as impure and unjust (“What did we ever do to them?” we often ask.) based on what we see as individual motivations toward evil instead of selfless impulses of national defense.

But, of course, the terrorist, just like the soldier, believes that he is doing the right thing, defending his homeland from the imperialist West and his faith from the infidels.

And the effects on those who die are exactly the same: pain and trauma, destruction of bodies and disruption of lives.

In the end, both war and terrorism turn us all into psychopaths, allowing us to condone evil acts for the sake, we think, of noble causes.
Posted by Lael at 12:50 PM No comments:

Reason and Compassion Among the Non-Rationalists


While the human mind is capable of rational thought, humans are, by and large, not rationalistic; rather, we're totemic and associative. We love to think we're reasonable and will go deep into rationalizing why we're right, but to question the foundations of our preconceived notions is going too far for most people most of the time.

Messing with our preconceived ideas messes with our sense of identity, and while ideas can be constructed and reconstructed essentially at will, identities take years, lifetimes, and sometimes many lifetimes, to develop.

The problem this causes Americans in particular is that our political system was developed by self-declared rationalists under the assumption that with the proper training and education, everyone would think just like them.

That is why they put confidence in such concepts as “the marketplace of ideas,” which was supposed to allow reasoned debate that would lead to the best solutions being supported; they trusted in deliberative bodies and in the notion that people would, in the end, elect representatives who were better than they were, more able to govern.

But at the same time, the new nation stripped off a lot of those cultural ghosts that form the traditions, rites, customs, and mores that help define the individual, that help create identity.

On the one hand, this was a great boon: many of those European ways of being were fraught with inequality and oppression, and good riddance to them. But this also created a perpetual crisis in American life: without an ancient culture to tell us who we are, Americans were forced to create new identities with the bits and pieces left behind and the new ways of existence discovered along the way. There is, then, a sort of urgency in the American psyche, a desperation for identity. We can hear it most plaintively in those who call themselves conservatives. Uncomfortable with the need to constantly create anew, they cling to an imagined past wherein these questions were settled. The tone of voice of a Michele Bachmann or a Glenn Beck betrays this desperation: they keen out a world in constant crisis. This crisis is in direct proportion to their discomfort with the American project, which is bricolage, building an identity with what you have, inspired by what you want. 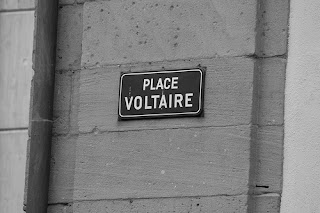 This is also why those who whine most loudly about “freedom” are the very ones who practice it the worst, gravitating toward hierarchical corporate structures, police state practices, walled compounds, and strict religions. This is why “blue” states tend to fare better on measures of quality of life, stable marriages, and productivity. Those who are more familiar with personal ambiguity are less likely to let others fail, less comforted by others' struggles, more likely to support the sort of costs of “finding yourself” through education, small-scale entrepreneurship, personal failure. They've been there themselves, or they've been close enough for it to have scared them into compassion instead of contempt. They've seen how struggle is part of success, not a punishment for some inherent inadequacy.

And this is America at its best, forcing us through our personal crises to think compassionately, to act out of fellow-feeling instead of fear.